CHRIST THE KING by MIROSŁAW PATECKI

In 2001 Polish priest Sylwester Zawadzki came up with the idea to erect the biggest statue of Jesus Christ in the world on the outskirts of Świebodzin. The local authorities, church and citizens of the town mobilized to create this religious monument, and sculptor Mirosław Patecki was commissioned to design it. The statue Christ the King was inaugurated ten years later in November 2010, about sixty kilometers from the German-Polish border and not far from the highway and train tracks of the Berlin–Warsaw line. The figure and its base reach over fifty meters, roughly the size of a ten-story housing block. It has already attracted thousands of worshipers and pilgrims and thus contributes to bringing tourism and economic development to the structurally weak border region. There are future plans to establish a modern pilgrimage center, and to promote the statue worldwide—something that we also contribute to within the 7th Berlin Biennale.

During the exhibition the artist creates a replica of Christ’s head and turns the first floor of KW into his studio. Patecki doesn’t celebrate his artistic autonomy; rather he offers his services to the church, and that gave him the opportunity to create the giant figure of Jesus. Yet he is not really satisfied with the result. Lack of money, shoddy materials, and an unprofessional team transformed it into a dummy rather than a finished art object. But still it is able to induce religious enlightenment, and according to Patecki this is one of the roles of good art.

In the Berlin Biennale, the sculptor is given full control over the process of creation and hopefully a perfect face of Jesus will be presented to the public. The Christ the King statue confirms the institutionalized power of the Polish Catholic Church and its use of art. Bringing Christ the King into the realm of contemporary art, we try to do what the Vatican planned with its announced participation in the Venice Biennale—to show how powerful, ideological, and impressive religious art, and art in general, can be today. Not only in the new global churches in Nigeria or India, but also still in Central Europe, 100 kilometers from Berlin.

BEYOND by LOU CANTOR (collective)

Beyond documents the final phase of the construction of Christ the King in Świebodzin, when it was still not clear if the combination of compromised engineering techniques and the parish priest’s faith in the project would actually lead to its completion. For example, an unanticipated change in the dimensions of the figure caused problems with its placement, forcing it to be rotated thirty degrees to the left, so that Christ’s gaze turned away from the town toward its periphery and the outlying TESCO supermarket. The effort to erect such a monument in the middle of nowhere recalls the old saying: faith can move mountains.

Film still from “Beyond”, © Lou Cantor (Lou Cantor is a Berlin-based artist collective whose main scope of interest is grounded in intersubjectivity and interpersonal communication)

FACING THE SCENE by ANNA BARANOWSKA AND LUISE SCHRÖDER

Facing the Scene was shot in November 2010, depicts the inauguration of the statue Christ the King. It concentrates on the logistics and preparation for the event, as well as its dismantling at the end of the celebrations. Meticulously observing the church community gathered for this ritual, the film shows everything from health and safety measures to people’s genuine awe and the public manifestations of belief embodied in the sculpture. It’s a kind of anthropological investigation of how the consumption of holiness is packaged.

Film still from “Facing the Scene”, Courtesy Anna Baranowska and Luise Schröder (Anna is an artist whose work deals with collective social phenomena and the mass media landscape of our time. Luise is an artist, art mediator, and activist who is interested in aspects of history in the making and its reconstruction).

PROBABLY THE BIGGEST KEY IN THE WORLD

When the Palestinian refugees of 1948 and 1967 left their homes, they took their keys with them in the belief that their return was imminent. More than sixty years have passed, and their numbers have multiplied to around five million in Palestine, the Middle East, and beyond. The keys have been passed on from generation to generation as a keepsake—as a memory of their lost homes and as lasting symbols of their desired “right of return”.

In 2008, the residents of the Aida Refugee Camp near Bethlehem collaboratively produced what is said to be the largest key in the world (its makers have even attempted to gain this official title from Guinness World Records). The key, weighing close to one ton and measuring around nine meters in length, was made of steel and installed at the entrance of the camp as critical manifestation of nonviolent expression and a means of overcoming victim portrayals. 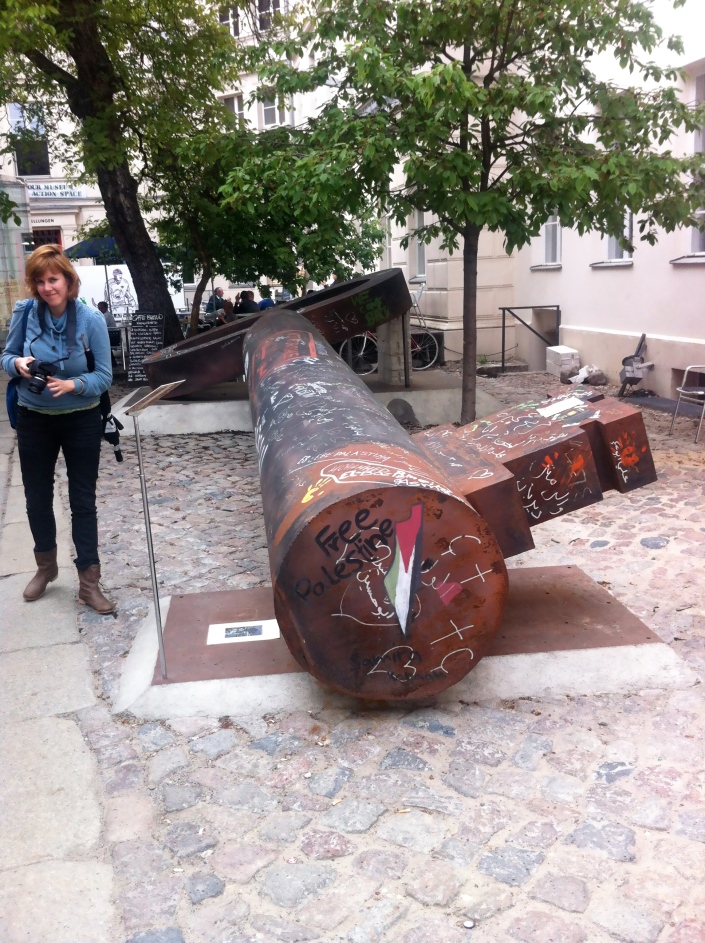 The 7th Berlin Biennale entered into dialogue with the Aida Refugee Camp community, arranging to borrow the sculpture and bring it to Berlin for the duration of the Biennale. The key travels thousands of miles across land and sea to Germany, to bring to the foreground the question of the return of the refugees and to critically thematize future perspectives. Workshops with Palestinian youths in Berlin and the Aida Refugee Camp aim at discussing issues of homeland, memory, and contemporary identity in light of the past and present. Accompanying public discussions seek to contribute towards a constructive social development by questioning collective artistic production and narratives. Text by Toleen Touq

Key of Return is a collaborative project of the 7th Berlin Biennale and the International Academy of Art, Palestine in cooperation with Schlesische27, Internationales JugendKunst und Kulturhaus, Friedrichshain-Kreuzberg. The accompanying workshops are supported by the Goethe-Institut, Ramallah.

The travel of the Key of Return from the Refugee Camp  to the Biennale raises questions about the underrepresentation of the Palestinian narrative in the public debates in Germany. Starting from the meaning of May 15 – for one the National Foundation Day and for the other the day of flight and expulsion – the talk seeks to discuss the mediation of the Israeli and Palestinian narrative in the public debate in Germany. The responsibility of the Germans for the Holocaust has contributed to the fact that the Palestinian narrative is not part of the public consciousness. These two different narratives, however, are an integral part of the political identity of both societies and at the same time a legitimacy of a continuation of each victim role. Neither a comparison of the trauma nor an exclusivity of each trauma should be emphasized, but instead the event will follow continuative questions and contribute to knowledge transfer and a better understanding of the conflict.

A small, nondescript detail catches our eye; arrests us momentarily. Caught up in the moment, we stand and gaze at the scene or the image. But which fragment is it, and why? In the exhibition Detail,  Florian Japp, Madeline Stillwell and Peter Truschner show which moments of their perception influence their practice. Installations, collages and photographs explore how the fragmentary and fleeting reflects a wider reality.

Florian Japp (born 1971) likes to tease. Taking Franz West as his starting point, he constructs obviously non-functional large-scale sculptures in acid shades of bright. While associations with the gym (nets, balls, ropes, poles) are intended to frame the piece, these remain fragmentary. The viewer is left bemused, caught trying to imbue the pieces with functionality, but losing himself in the artist’s puzzle. The action of the pieces is thus restricted to the imagination, and one is left meandering in a slightly malfunctioning parallel universe.

Peter Truschner’s (born 1967) photographs resemble film stills with highly-saturated colours and seemingly casual compositions, fragments excised from a much grander narrative. Truschner  is a highly-regarded author, and his flair for the narrative spills over into his photographic practice. His focus is on the quietly grotesque: butchered carcasses contrast with the harmonious assemblage of a mid-day meal, the restful repose of a trader among the cluttered debris of the street. In the series Glue Trushner investigates the images come together with the personal experiences and associations of the viewer to form the delicate web which unites the depicted narratives.

Madeline Stillwell’s (born 1978) delicate collages take their life from sculptural remnants of city detritus. Decoupages taken from fragmental photographs of decaying machinery, rusting shutters or derelict outbuildings, their colours softened through wind and exposure, resemble fantastical machines. Objects are thus re-infused with life, but removed from representation, their origins no longer apparent. Stillwell thus hints at a wider reality, but leaves the viewer caught between the work’s constitutive elements and the alternative reality they suggest.

The exhibition runs from 6th April to May 26th.

Urban dictionary: Phrase originaly used by well known actor Roy Scheider in the 1975 blockbuster ‘Jaws’. He utters the line when he gets a good look at the size of the shark that is circling the small fishing boat he is on. You/We’re gonna need a bigger boat! is used in day to day life when a situation seems insurmountable and most likely this is what this ever moving and collective run guerilla institution from Kreuzberg wants to highligh with this exhibition.

They pop up with artists curated shows every Thursday night from March-May in Kreuzber’s ancient red-brickstone Post building between Görlitzer Park and Schlesisches Tor. On April, 5th within the group show “We’re gonna need a bigger boat!”, they presented seventeen paintings/collage/pictures, one video in a tabloid and four sculptures/objects from the following artists (in the slide shown in order of appearance):

The videos below show the spontaneous performance by young French artist Nicolas Puyjalon: 1… the beginning: using his hands to built something to arrive to “an objective”, 2… later on, issues trying to stand straight the artifact he built to reach his purpose  … the irreverent of the effort (moreover in society nowadays). It was good to see how people (public, spectators) responded. To me was a beautiful methaphore of “working as a group is better than alone // …I cannot alone, but together WE can”, do not know if this was the objective but resulted in this pleasing interaction, 3… finally Nicolas got to put the sticker on the ceiling and his goal accomplished (last pic shows the little red sticker in the ceiling)

Vandals #2 and #3 are part of a series of temporary public sculptures by the London artist and architect Julika Gittner. Chained to lampposts, the objects are exposed to an urban condition over a period of 10 days. Whilst the sculptures act as provocateurs as well as receptacles of aggression and vandalism they are also vulnerable pieces of artwork. Outside of the protective space of the museum their fragile constructions become sensors for how the public treats culture beyond the grip of the bourgeois white gloves. The process of exposing the objects on the street is documented in photographs. The sculptures were presented at DAZ.